IT IS MY PLEASURE TO PROFILE AUTHOR JOHN COON ON MY BLOG TODAY. HE IS THE AUTHOR OF 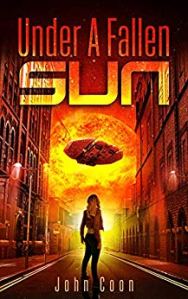 Under A Fallen Sun

It’s the one thing that sparked my interest as a child in becoming an author. I wanted to write my own stories featuring fictional worlds with characters I created. I have zero interest in doing fan fiction, putting a new spin on an old fairy tale, or writing an unnecessary sequel to a piece of classic literature. Building my own fictional worlds is so much fun.

Creating backstories and histories for your characters and settings is so much fun as an author. For both of my novels, Pandora Reborn and Under a Fallen Sun, I filled page after page with character biographies, personality sketches, historical events, geographic settings, and other relevant information from that fictional universe.

Weaving backstory threads into the main plot and key subplots serves a useful purpose. It infuses life into the characters and the setting. These elements feel more real to both author and audience. The plot also feels more organic. It becomes driven by the decisions and personalities of your characters rather than simply existing for the sake of existing.

Inserting backstory threads into your novel or short story requires a surgical touch. The last thing you want to do is bore your audience with an information dump that draws them out of the story.

Some traditionally published authors and indie authors are not careful in how they build out fictional worlds. These authors become too fascinated by their own creations and lose sight of what information is relevant to the story at hand. They don’t know where to draw the line when including backstory and cram so much of it onto page after page. Soon, much of their novel reads like an unending series of Wikipedia articles on their fictional world.

Too much backstory bogs down a story’s pace. Readers aren’t dying to read treatises on politics, history, culture, religion, and other topics tangentially related your fictional world. Cram that information down their throats and you run the risk of inviting them to toss your book aside.

Backstory material can enhance your main story in a meaningful way if you show some restraint on what you choose to include. Always ask yourself these questions before weaving a particular backstory thread into the narrative:

The biggest key is keeping the backstory in the background. Do not let it overwhelm the main story. You don’t want any backstory thread to interrupt the pace or flow of the narrative.

In both novels I’ve published to this point, I drew on extensive backstories to create the main story. Under a Fallen Sun is set in a fictional universe that includes a broader spectrum of alien races, planets, histories, technologies, and characters I only hint at within the narrative. This extensive backstory has given me a wealth of material to mine for many more novels and short stories in the years ahead. Pandora Reborn is also set in a broader fictional universe that features an extensive supernatural history of Deer Falls and a broader mythology involving monsters, demons, witches, vampires, and other creatures. Only a small percentage of what I jotted down made it into the actual story. The rest of it exists as hints and allusions left to the imagination of my audience.

Ultimately, a backstory is supposed to function in that manner. It offers a snapshot of a larger world beyond what you see written down on each page. Those backstory details should never send readers plunging down rabbit holes that take tons of time and energy to escape from.

John Coon has possessed a love for writing since age 12 when he typed out his first stories on an old typewriter belonging to his parents. For 15 years, John has worked as a sports journalist. His byline has appeared in multiple publications and on multiple websites nationwide. John currently writes for the Associated Press and Athlon Sports. He is a graduate of the University of Utah and currently resides in the Salt Lake City metro area. John published his debut novel Pandora Reborn in 2018. Under a Fallen Sun is his second novel.

Here are the purchase links for Under a Fallen Sun:

Here is the link to my author website and blog: http://johncoon.net

Here are my social media pages –

To follow along with the rest of the tour, please visit the author’s tour page on the 4WillsPublishing site.  If you’d like to book your own blog tour and have your book promoted in similar grand fashion, please click HERE.

4 thoughts on “Welcome to the “UNDER A FALLEN SUN” Blog Tour! @JohnCoonSports @4WillsPub  ”