TODAY, I FEATURE AUTHOR MARY ADLER ON MY BLOG AS SHE EMBARKS ON HER WATCH “RWISA” WRITE Showcase Tour! 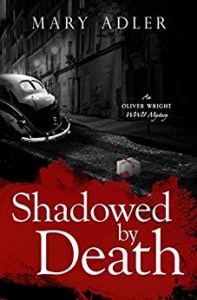 Blurb:
San Francisco, 1944. Sophia Nirenska, a Polish resistance fighter who survived the Warsaw ghetto uprising, finds safety in California until someone tries to kill her. She insists political enemies want to silence her, but homicide detective Oliver Wright, on medical leave from the Marines, believes the motive is more personal. He and his German shepherd, Harley, try to protect Sophia, but she insists on doing things her own way—a dangerous decision.

Oliver guards Sophia as they travel from an Italian cafe in Richmond to communist chicken farmers in Petaluma where her impetuous actions put them both in mortal danger.

When Oliver rescues a girl and her dog who are running for their lives, he discovers the dark secret at the heart of the threat to Sophia, a secret with its roots in Poland. When he does, he is forced to choose between enforcing the law as he knows it and jeopardizing Sophia or accepting a rougher kind of justice.

Shadowed by Death accurately portrays the fears and troubles of the communities of northern California as they bear the burdens of World War II and celebrate the gift of finding family among strangers.

I have studied and observed crows for years, and the more I’ve learned about them, the more I admire their complex family and flock relationships. They are intelligent, create and use tools, and they teach their skills to other crows. As Rev. Henry Ward Beecher said, “If men had wings and bore black feathers, few of them would be clever enough to be crows.”

Over the years, I have told my family and friends more than they ever wanted to know about crows. One person said, after hearing the stories I told about them, that she stopped trying to run crows down with her car. (There is so much wrong with that statement, that I don’t know where to begin.)

During the non-nesting period of the year, crows gather at night to roost together, sometimes in flocks of thousands. They are stealthy and take a roundabout way to the roosting place. They have good reason to be wary. For decades, humans have killed them, even dynamiting their roosting places at night.

Like many natural creatures, they are good and bad, depending on your viewpoint, and not everyone appreciates their beauty. But I love to watch them streaming across the sky–one small group after another–as they return from foraging to join the flock. When they are together, those who have found a safe source of food will tell the others where it is. They share, but only within their own flock.

One evening, after watching them move across the sky, I wrote this:

Across the bruising sky.

An arpeggio of eighth notes

in the fading light.

to the nighttime roost:

No bows, no curtsies,

No fear of reviews.

They need no applause to perform their works.

We ask that you also check out their books in the RWISA or RRBC catalogs.  Thanks, again, for your support and we hope that you will follow each member along this amazing tour of talent!  Don’t forget to click the link below to learn more about this author: